Day 108- 7.7.15Fancy Pants: We hiked 13.3 miles today (1151.2-1164.5). We woke up around 6, but didn’t leave the shelter until around 9. We were looking for options for places for BC to pick us up for All Good and texted him two options- one for a road crossing today and one road crossing tomorrow (I was secretly hoping for today and was happy that is what worked best for him).

Most of the hike today was along the ridge that runs along the Susquehanna. We stopped at the next shelter for lunch and we’re definitely impressed! The shelter is two stories with a big wrap-around porch that sleeps 20+ people. We got to the gap around 3 and jumped in the river to cool off and BC drove up just as we were packing up. 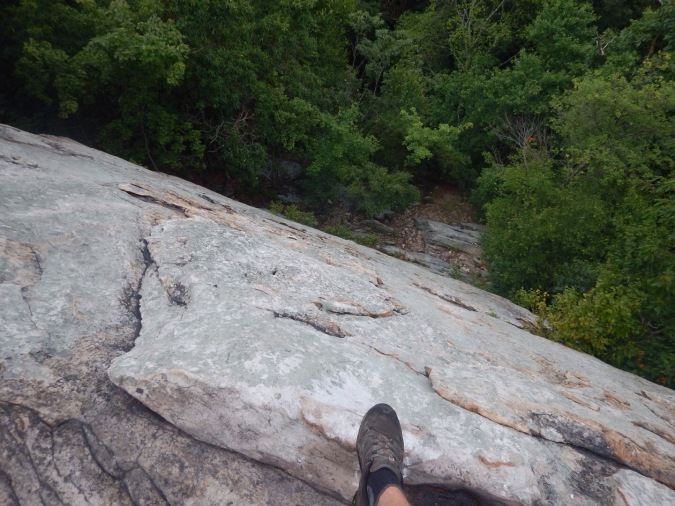 One of BCs friend’s band Fiery Deep was playing at the Mason Dixon fair in Delta, PA so we stopped by. There was also some sort of truck mud race at the fair that was pretty cool (although not as cool as the demolition derby!).

BC made us some delicious quesadillas for dinner and then we showered and went to bed. 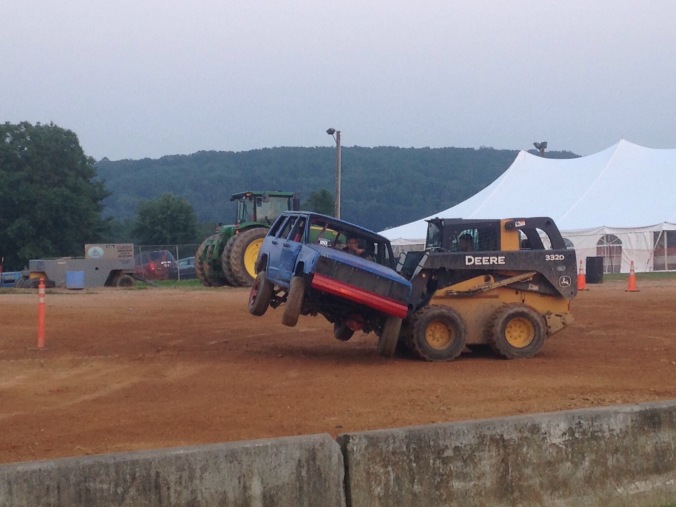 Fancy Pants: Zero day. We woke up from the best sleep we’d had in a long time. Even I slept until 9! My bedroom when I was in high school was in the basement, so sleeping in the basement where it was nice and cold and dark was a real treat :). We ate a delicious breakfast and then set out to run some errands. Stopped at REI so Fuego could try on shoes and went to the grocery store for resupply and to get food and drinks for All Good. Afterward, We grilled out. BC’s dad made onions on the grill by putting the onion in foil with butter and some seasoning. I think that’s my new favorite way to cook onions! We went to bed early so we could wake up early and get on the road. 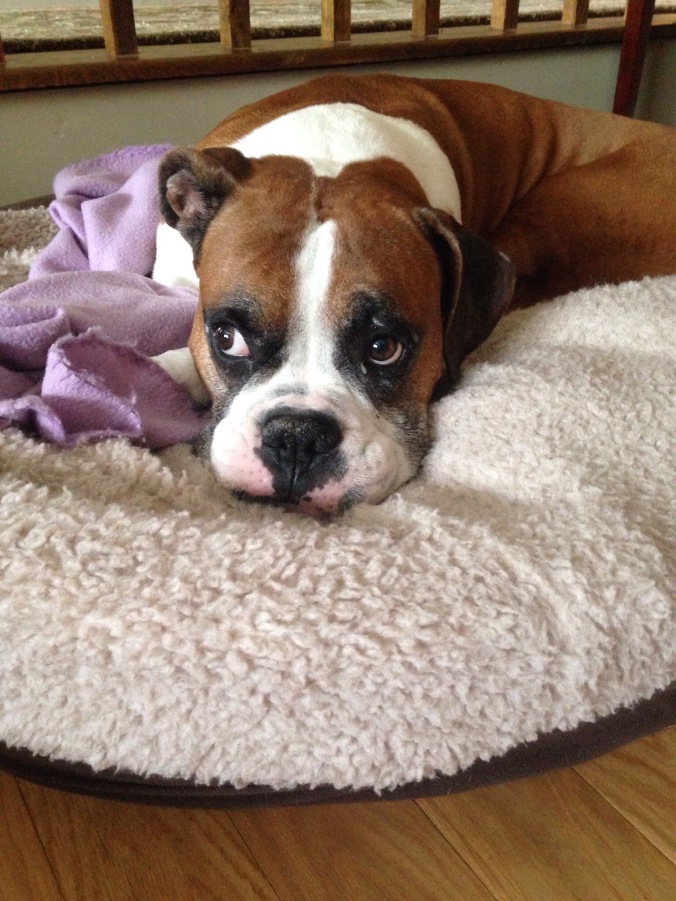 We left around 7 and picked Greg up in Harper’s Ferry. The line to get into the festival wasn’t and bad as I expected it to be. Along the way, we spotted two people walking who looked like they were going to the festival too. Wanting to return the favor for the rides we had been given on the trail, BC pulled over and they gratefully jumped in. Once we got to our camp spot, it came up in conversation that we were trying to get back to Pennsylvania after the festival. As it turns out, Kyle and Louis were heading to Philly after the festival and offered to drop us off on the way. Love how everything works out in the end!

The lineup for All Good was pretty awesome. Lots of funk, some jam bands and most importantly for Fuego- PRIMUS!

Fancy Pants: Zero day. BC drove us all to where Kyle and Louis had parked their car and then headed back to the trail in PA. When we got back to the gap, we ran into Kush who said Downhill, Toasty, Goldie, Freestlye, Moonbow and LB were close behind us! I was worried about getting back on trail around a bunch of strangers, and here we were with our trail family!

We camped right by the creek. A game warden came by and said we were in violation of the rules for State Game Lands (too close to water and not close enough to the AT), but that we could stay the night since it was almost dark.

Fuego: we hiked 16.1 miles (1164.5-1180.6 ). So I thought that after being off the trail for almost a week would be really rough to start back on. I was wrong. My hike was mostly enjoyable and I was happy to be back on the trail. It did get a bit hot, but it wasn’t too rocky and mostly flat. I think that also helped us get back into our groove as well. If we started back from the bottom of a mountain we probably would’ve had a different story for you.

When we arrived to our campsite everyone started cooking dinner immediately. This is a normal routine for us, because we are usually always hungry. Thanks to Goldilocks, we discovered edible mushrooms called Chantrells that you can pick in the woods. With a little olive oil and garlic, they were incredible! Also tried dried mangos from Trader Joes for the first time. They are like crack to me. I can see myself buying these constantly when I’m finished with the trail. Seven had a lot to talk about at the campsite. I’m pretty sure he’s the reason everyone went to bed early, haha! 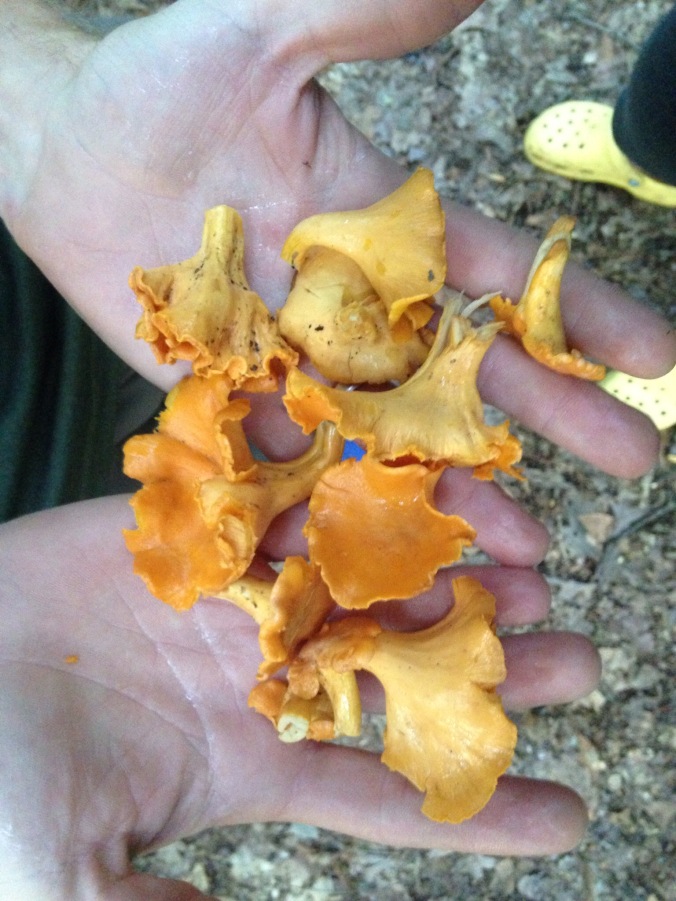 Fancy Pants: we hiked 15.9 miles (1180.6-1196.5). We woke up soggy after the thunderstorm last night and packed up slowly, trying to dry our gear. Looks like we definitely need to seam seal out tent again. It was misting outside as we did our only climb of the day. Now that we aren’t consistently climbing mountains, every 900 foot climb seems much harder than it would have been a month ago. We stopped at the 501 Shelter which was really ugly, but it had a free shower. The shower was a little hut behind the shelter with a hose nozzle hanging inside through a hole. The water was cold and the water pressure non-existent, but after 7 days of being dirty, I thoroughly enjoyed this shower! We opted to risk getting rained on and hiked a few more miles. The trail was pretty rocky and hilly, which pretty much negated my shower. We ate dinner at a beautiful view (Goldie spilled hers), then set up just as it got dark. 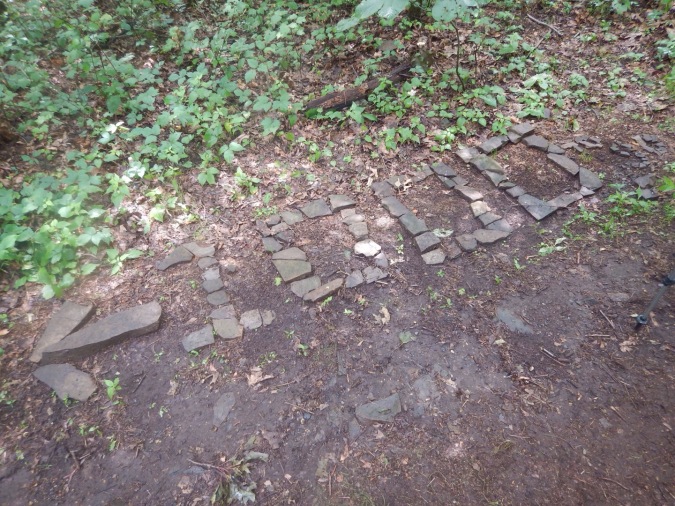 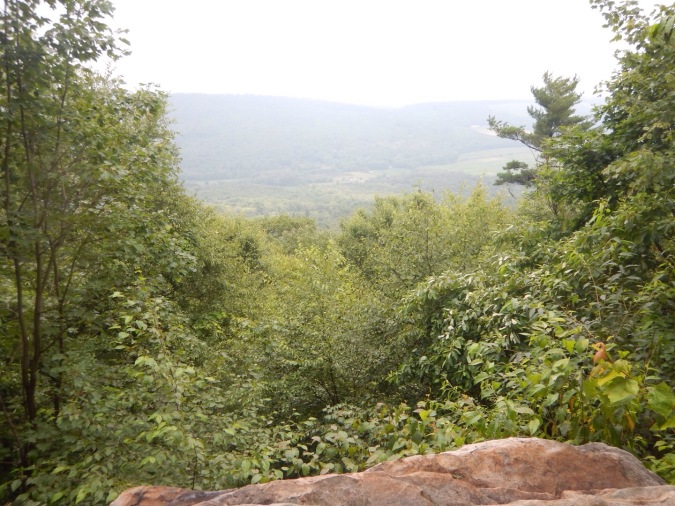 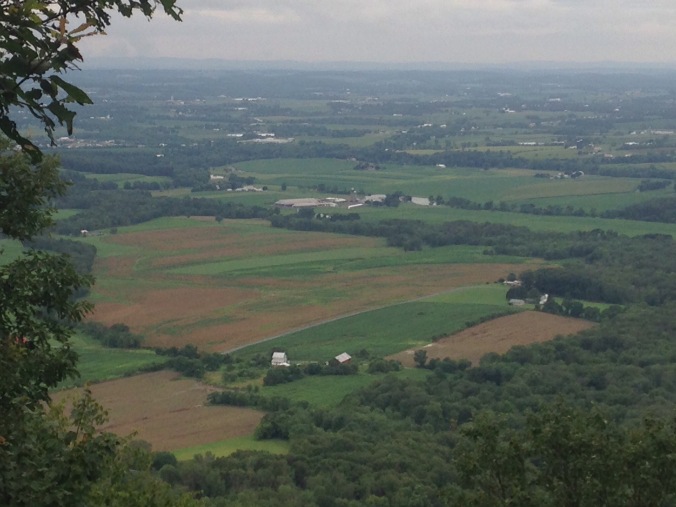 Fuego: We hiked 12 miles today (1196.5-1208.5). I had a very unpleasant morning. A storm came through the middle of the night with a torrential downpour and we ended up with a puddle in our tent. We don’t usually have this problem, but we set up late and it wasn’t a good place for our tent. My blanket and other gear got soaked. I was pretty bitter in the morning, but I was glad it didn’t get cold that night. If it got cold, I probably wouldn’t have gotten sleep that night. I remember waking up in the middle of the night with my feet soaked and decided to ignore and pass back out to avoid agony.

The hike was nothing but wet! It was puddle after puddle and sometimes the trail looked like a river. I felt like I hiked more off trail due to the trails condition. It slowed us down so much that we decided not to go to town that day. We ended up staying by the shelter and I made a huge fire to dry out all the gear. Once other hikers came in, it turned out to be a hiker reunion. There were hikers that I haven’t seen since before Damascus. 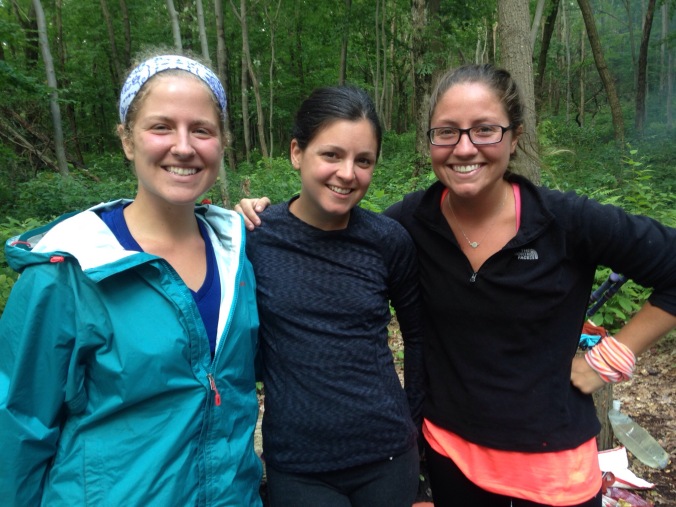 Fancy Pants: I think the trail today was more like a creek that emptied into random ponds. I’ve never seen such a wet trail! It wasn’t until we stopped for lunch that we saw another hiker wearing crocs through the whole thing. Duh. We should have thought of that!

Fancy Pants: We hiked 14.7 miles (1208.5-1223.2). Woke up freezing! I wore my blanket as a dress until the last possible moment! We decided to wake up early today to get into town without feeling rushed. I hiked in a long sleeved shirt for the first two miles this morning. We really had an awesome hike today. Goldie, Fuego and I talked and hiked and the miles just flew by. We decided to hike past Port Clinton to the next road crossing to be closer to Hamburg. Big mistake. We ended up on the opposite side of a major road and couldn’t get a ride. We ended up walking to Hamburg. Fuego and I arrived just as Goldie and Toasty were leaving the biggest Cabella’s in the world (it really is the biggest in the world, not exaggerating). We decided to skip Cabella’s and went to lunch at Red Robin then to Walmart for resupply. With full packs, the climb out was hard! When we got to camp, we were so full from lunch that we had a small snack instead of dinner. 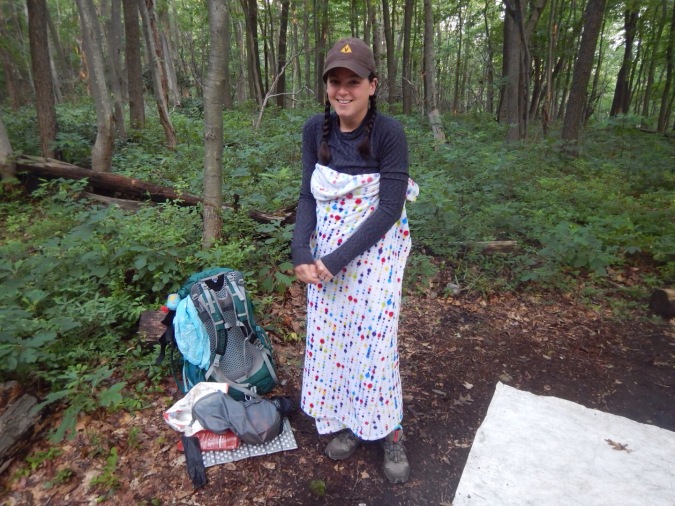 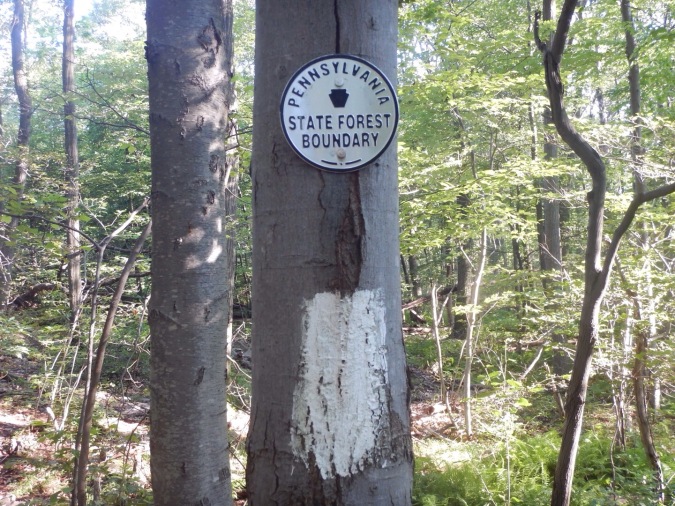 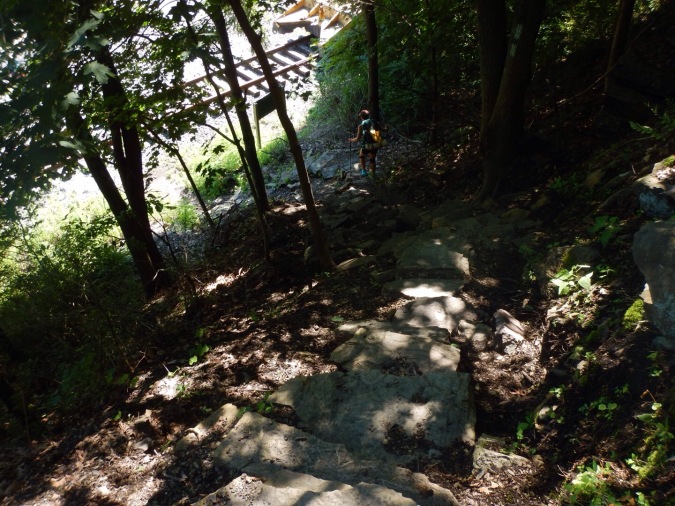 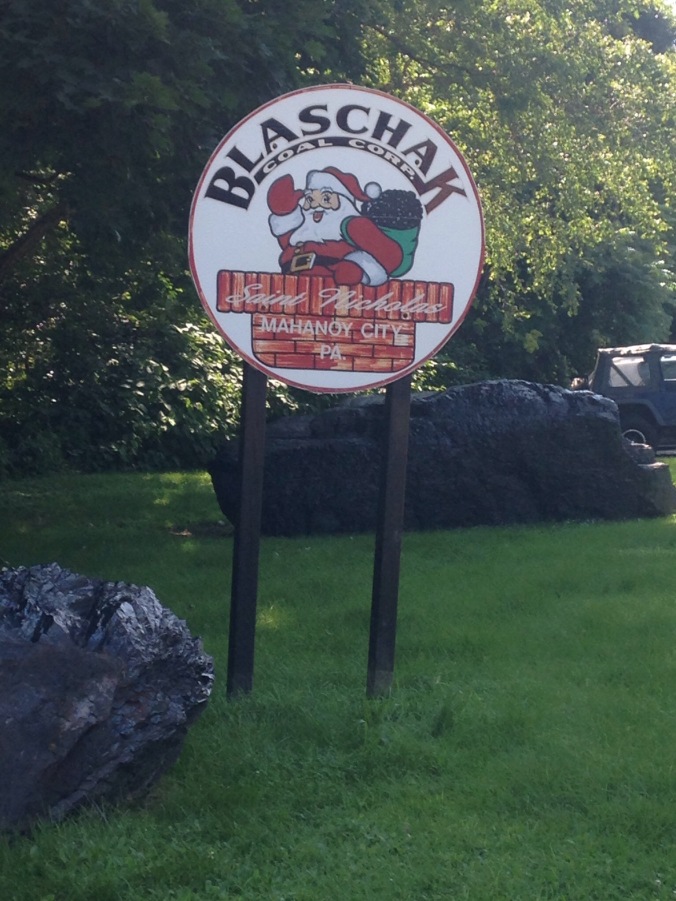 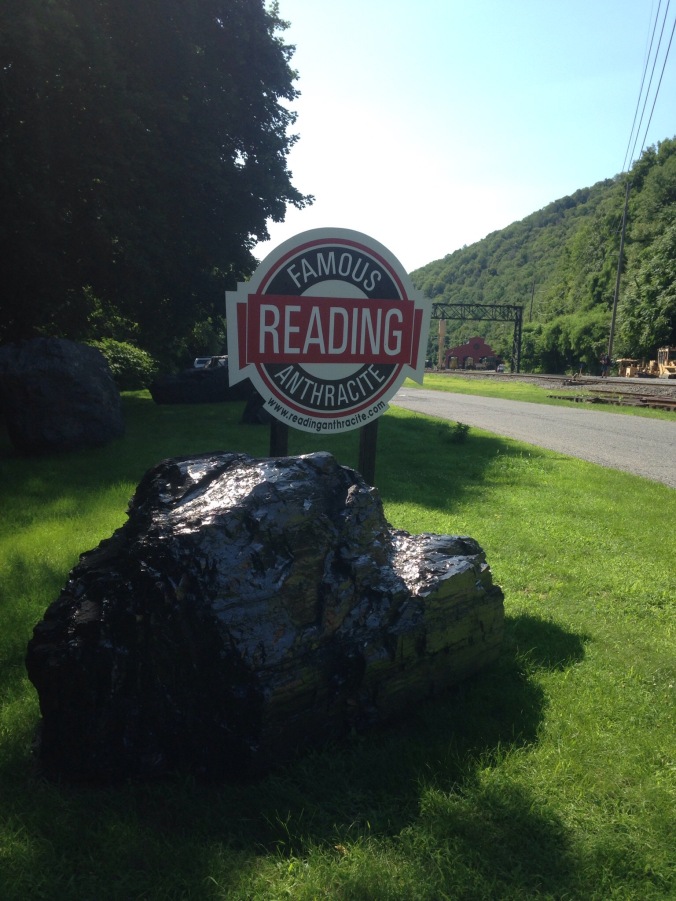 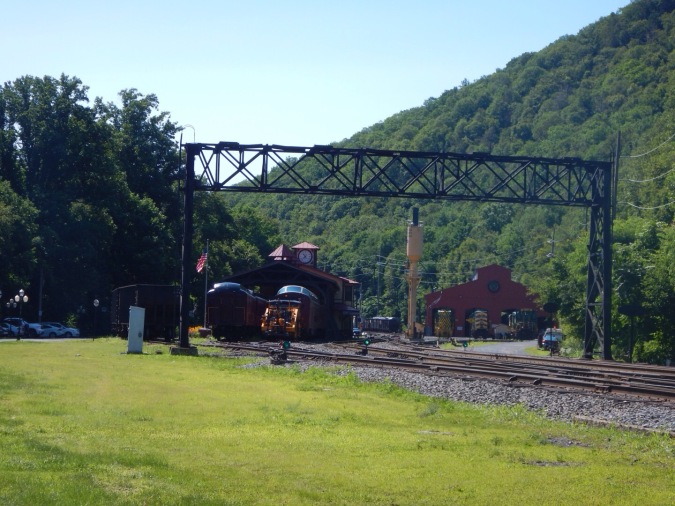 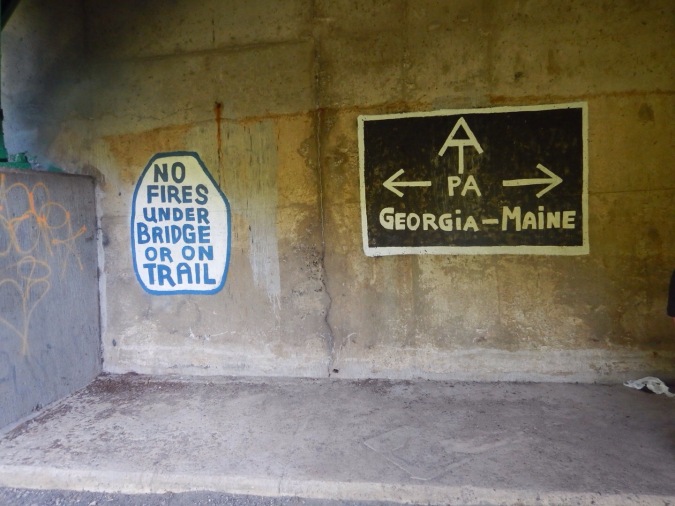 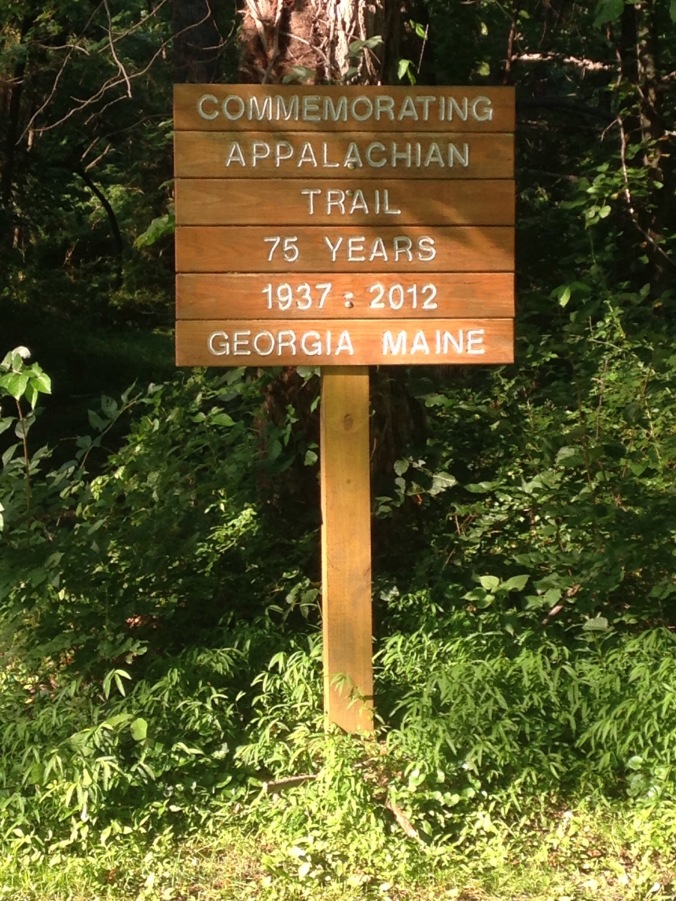